Ice-fishing with the Deeper Pro Plus on Nipigon Bay.

This is the Deeper in action in Ice fishing mode. Flasher on left, standard chart in middle and raw sonar column on right.

The hook can be seen with a small jigging motion, couple of larger arcs. In this case, both the top and bottom hooks show up on the deeper display. I could get all the hooks by adjusting the sensitivity but this gave me the best representation.

A small smelt school above and a likely fish below.

There is noise, which seemed to increase as the battery drained.

A missed fish rises from the bottom, gets a bit interested then returns to the bottom without biting. 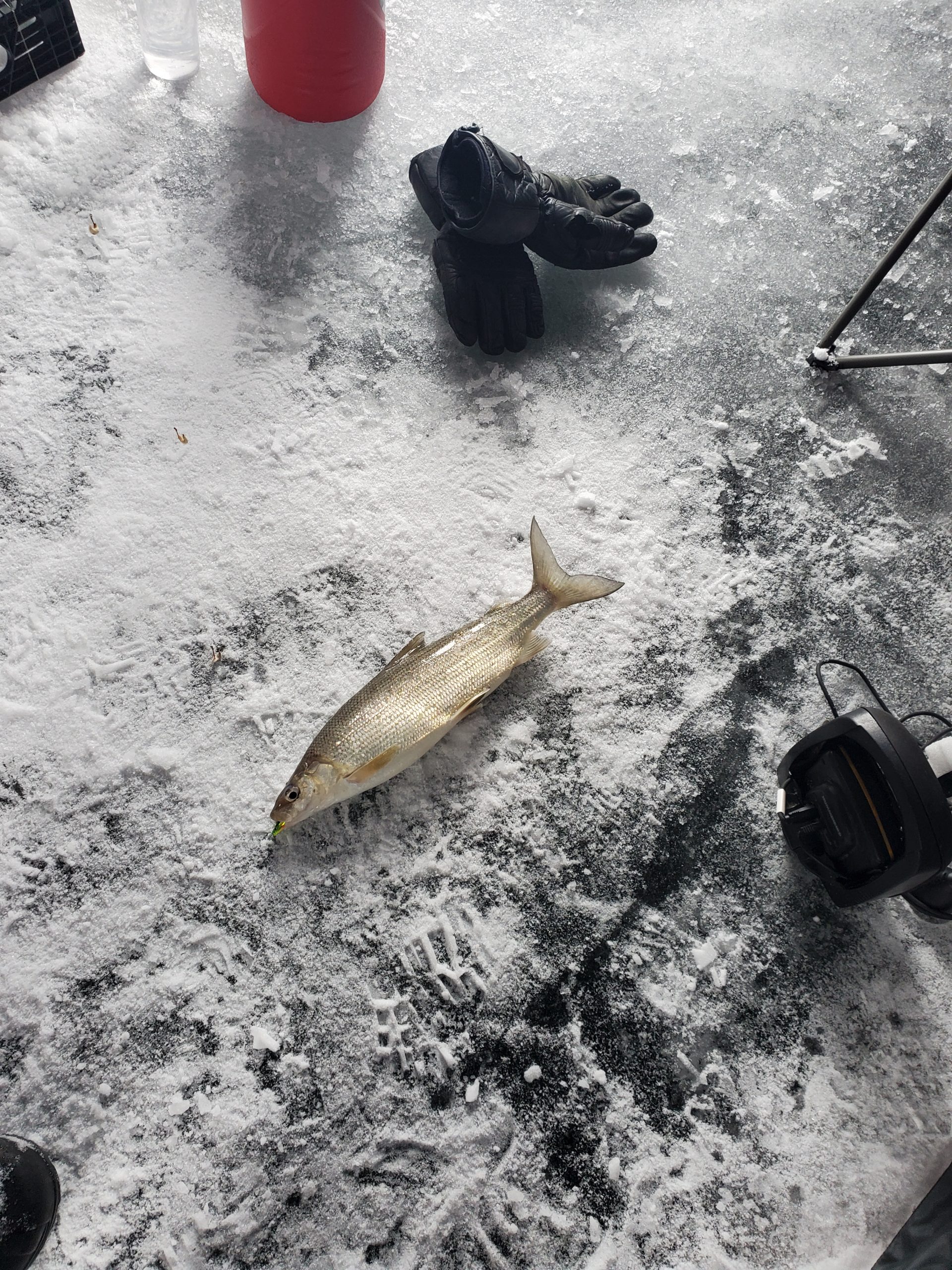 A fish pulled off the bottom by a slightly larger jig motion then held still. Fish strikes with a little more subtle action and comes up the hole.

Its relatively easy to get an idea of how the fish are reacting, without the sonar I would never have known the fish was there unless it bit. Whitefish are notoriously fussy.

Large schools of smelt were pretty constant, this is one of the larger ones, still couldn’t get them to bite. I will have to try some smaller hooks or a different presentation.

My hook can be seen along the top of the school. A larger fish near bottom left likely feeding on the smelt. 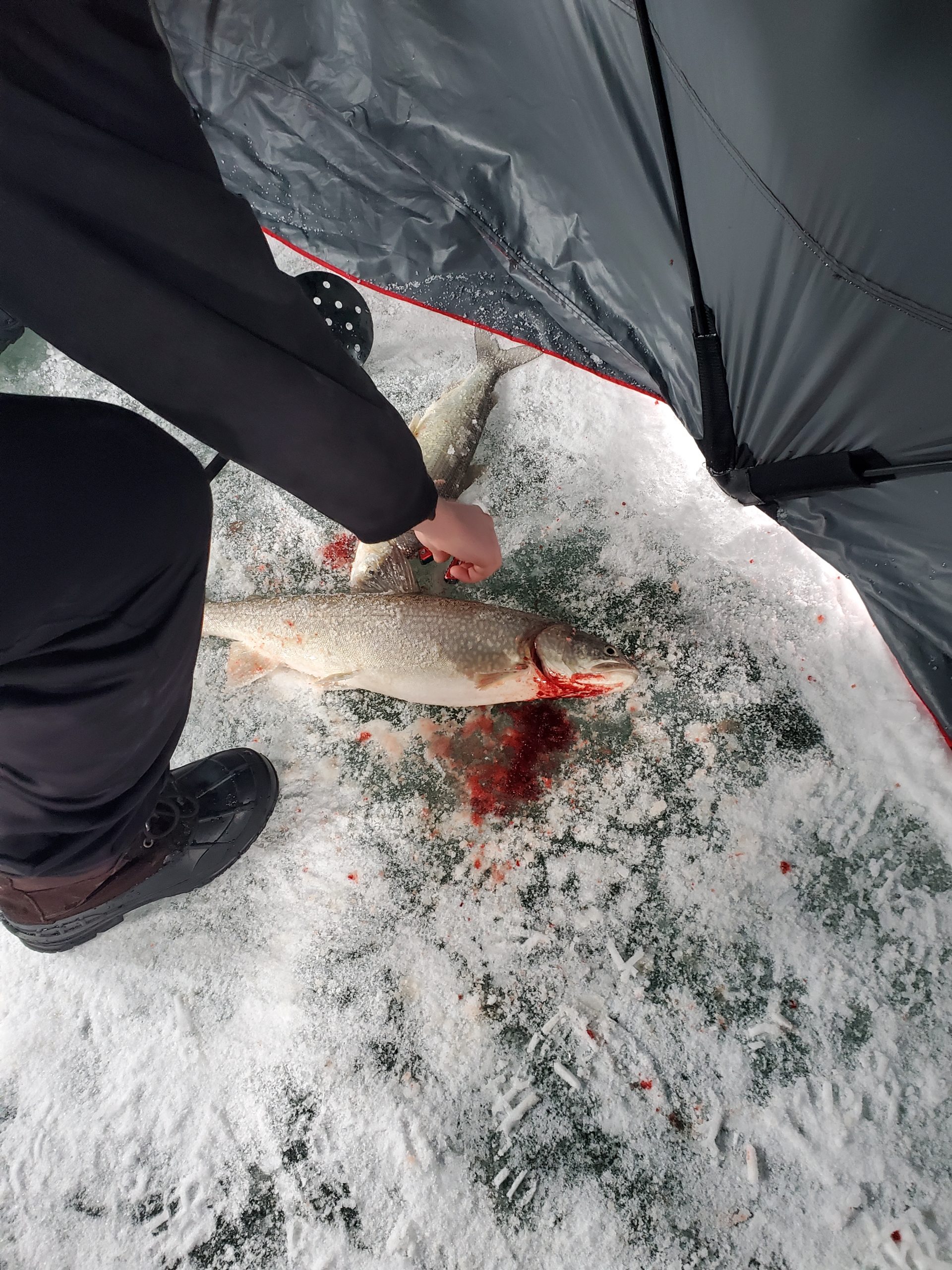 A lake trout feeding on smelts and following my hooks then takes off after a nearby hook. Was able to give him ample warning of the impending strike. The speed at which it moved was impressive.

​I create, and design maps, both on paper and digital GPS enabled maps for your smartphone. I have that particular skill and software. When people started coming to my bait shop looking for places to fish, I started making the maps for them. One thing that is lacking in our area are detailed bathymetry maps for our lakes. I have been looking for years for a simple GPS based sonar that I could use just about anywhere, and that would export to a file format I could use in my mapping software to create bathymetry maps of popular lakes.

Visit https://www.nwoutdoors.ca/smaps/ to see some of my GPS enabled maps.

GPS plotter/fishfinders I looked at were either too expensive or would only export the information in proprietary formats that cant be used in my software. Enter the Deeper Pro Plus, a castable, boat mountable, ice flashing small portable fishfinder that will export data exactly as I need to make maps. Priced at around $339 it is affordable and has the portability and export functions I wanted. The ice fishing flasher mode was more of a bonus, but unable to wait till summer, I headed out to give it a try Ice fishing on Nipigon Bay.

The Deeper fish finder has no screen; it uses a mobile device and wireless connection to display the sonar information from the small ball. A backup battery pack can easily extend your phone life; however, the Deeper will require 30 to 45 minutes to recharge.

The Deeper specifications are 6 to 8 hours of battery life and expect colder conditions to be less. I did fish for 6 hours with 15% battery life. I was expecting it not to last as long. My cell phone battery was dying at a faster rate and ended up at 10% after the 6 hours.

The sonar is activated automatically when it is in the water and shuts off when out of the water. The downloadable Deeper App connects to the Deepers Wifi (older versions used Bluetooth), and I had no trouble connecting. One feature I didn’t realize was that the Deeper app would store the entire sonar profile from your fishing trip. You can go back and look at the entire time-stamped sonar chart and pick out all the fish you missed after the fact.

The resolution and separation were good and I could easily distinguish my multiple hooks by adjusting the sensitivity. There was more noise than I would like, but it wasn’t too bad. The smelt schools showed up and caused the biggest problem as the larger fish are lost easily in a large school.

Overall I enjoyed using the Deeper; I could usually differentiate whitefish and Lake Trout by how they reacted to the bait. I just wish I could have gotten some smelt to bite.

The ebb and flow of the current did cause issues from time to time as my hook drifted outside the range of the sonar. Usually fixed by pushing the Deeper to the other side of the hole. The nearly two feet of ice had little to no effect on the readout; however, I would expect it to have issues in shallower water.

Since the Deeper uses a smartphone, it is advantageous to have a tablet or phone stand of some sort and, unless using in a hut, something to shade the screen. In the ice hut, I used a smartphone holder clipped to the tent or chair.

When I was using the Deeper outside by just holding my phone, it was awkward. The sun reflecting on the screen also made it harder to notice fish. A few fish are on the recorded sonar profile that I didn’t even notice until reviewing it later at home.